Howdy-do, guys, gals, and non-binary pals! Welcome to the first ever movie review on my blog!

Unlike books, I’ve never really taken the time to dissect a film before. Either I like a movie, or I don’t. I’ve never been into debating the finer points of this scene or that, or delving into the deeper meaning of significant dialogue. (Just ask my boyfriend, who had to painstakingly break down all the Akira Kurosawa references in Star Wars for me because I just didn’t get it.) The most I do is call out movies that have harmful representation. Literally, that’s it.

But I just knew I had to make an exception for Dead Kids. It’s honestly my new fave, and if you haven’t seen it yet, I highly suggest you do so! 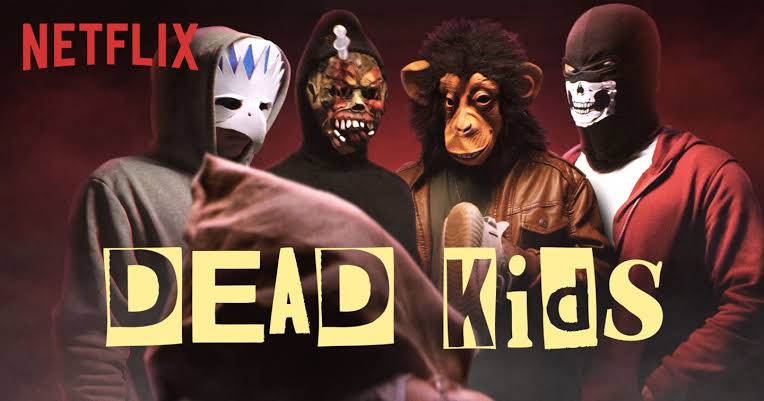 What’s Dead Kids all about?

Dead Kids is the first Filipino Netflix original movie (score one for local cinema!) and it’s all about the trials and tribulations of a bunch of high schoolers at an exclusive Catholic school. Instead of your regular coming-of-age plot, Dead Kids takes a turn for the dark when its main characters – Mark Sta. Maria, Charles Blanco, Paolo Gabriel, and Gideon Uy – decide to kidnap resident asshole Chuck Santos for ransom. Each of them has their own score to settle with Chuck, but none moreso than the brooding Charles Blanco, whose police officer father was bribed by Chuck’s drug lord father. (Interestingly enough, the plot of this movie was inspired by a kidnap case in Letran last year.)

The cast includes the following:

SPOILERS FROM THIS POINT FORWARD. YOU HAVE BEEN WARNED.

So what was so great about Dead Kids?

Dead Kids somehow manages to be both a coming-of-age movie and a noir thriller. One of the things I enjoyed the most about the juxtaposition between these two vastly different genres is the jarring switch between two atmospheres. One moment, the kids are in high school uniforms, sitting in a campus cafeteria, starting food fights. The next, they’re in seedy bars with dim neon lighting plotting the kidnapping of their classmate.

Director Mikhail Red proves himself to be a master storyteller with how he weaves visual and dialogue cues and hints into the narrative. On the surface, it just seems like a movie about teen angst gone wrong; but there are lessons to be had here, much deeper than your usual high school bullying issues. Personally, I feel that those who dismiss the movie has having disparate subplots incapable of being woven together missed out on those nuances. I came away from the movie thinking that I wasn’t just entertained; I was educated. And it was done without being preachy too.

One of the most evident themes of this movie is the immense gap between the rich and the poor. Of the four conspirators, only Sta. Maria – the poor scholarship kid in a school full of rich classmates, who can’t afford data for his phone and lives in a rundown apartment being rented out to him by an unsympathetic aunt – has anything really gain or lose. The other kids, with powerful families to back them up, to won’t face any real consequences for their actions. The ransom money doesn’t mean anything to them either. Only Sta. Maria, without wealth or influence, stands to be truly affected by the caper.

The movie goes out of its way to point this out. Blanco outright says, “Mga skwater lang natotokhang. Mukha ba kaming skwater sa’yo?” In English – “The police only kill the poor. Do we look poor to you?”

And, true enough, of the four, who is the only one the police actually kills?

This movie was pretty much a compelling indictment of the way the police operate in this country. They shoot and murder an unarmed teenager while on school premises – a teenager who had no family, no wealth, nothing to protect him. Meanwhile, the other two are peacefully arrested and offered a fair trial. And lastly, Blanco, the son of the corrupt police chief, is taken and hidden away by his father, completely evading justice.

Another thing that made this movie great was the superb acting. Everyone pulls of their characters well, but I’d like to particularly single out two characters for the amazing way they were portrayed: Blanco, played by Vance Larena; and Yssa, played by Gabby Padilla. Although not the main characters, these two deliver such strong, emotional performances, they completely capture the audience’s attention.

Larena is excellent as Blanco, portraying him as a silent, stoic, mysterous teenager who slowly descends into madness as the stress of keeping a classmate as a hostage and ransoming him off to a drug dealer begins to take its toll. You really feel Blanco’s disgust for Chuck and his father, and his deepest desire to get revenge on Chuck’s father for turning his own father corrupt. And finally, when things begin to unravel, Larena clearly telegraphs Blanco’s mounting fear and desperation. In the end, when Blanco kills Chuck’s father, it’s still a shocking moment, but it’s one that makes sense.

On the other hand, Gabby Padilla turns a side character into a compelling one with witty one-liners and facial expressions. Not only does she discover what her boyfriend and his friends are planning, she bribes and blackmails her way into the scheme and demands a cut of the ransom money. When things go pear-shaped and Blanco ends up shooting Chuck’s father, Padilla gives an amazing performance of a teen girl caught up in more than she can handle. She screams, cries, and runs off – but then a last shot at the end of the movie, zooming in on her cool, icy face as the police arrest Sta. Maria, Blanco, Paolo, and Gideon makes you wonder if she was as shaken up as she appeared to be.

The kids are all right. And they’re all right at giving us some great, meaningful entertainment. Stream Dead Kids on Netflix now!

What did you think?

☕ Have you seen Dead Kids? What did you think?
☕ What recent Filipino films have you seen?
☕ Any films you want to recommend?

If you enjoyed my content, consider buying me a coffeeor making a donation to my PayPal!

I’m 25, an ENTP, and a Virgo. I like nude lipstick, traveling and hiking, Spanish poetry, and getting into online fights about intersectional feminism.

I mostly read and review own voices and other diverse lit, but will occasionally foray elsewhere.